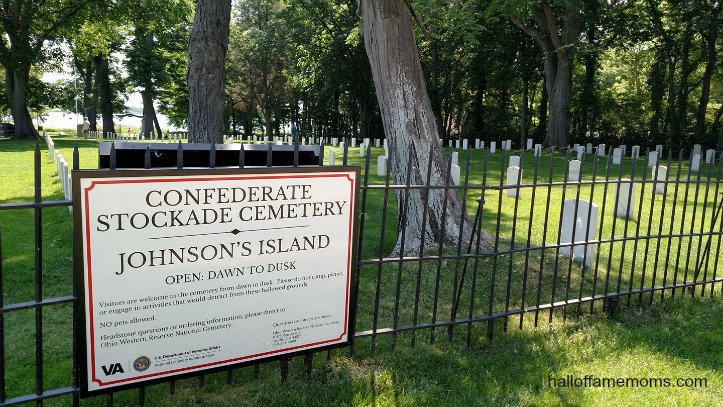 Did you know that Ohio has a Civil War era Confederate Soldier Cemetery? It’s true! It’s located on Johnson’s Island near Marblehead on Lake Erie. Our family made a stop there last month to check it out. Where is Johnson’s Island in Ohio?

According to Google maps Johnson’s Island is a 300 acre island located in Sandusky Bay on Lake Erie. You do have a $2 toll to pay in order to cross the causeway, and we knew THAT. What we didn’t know was that  –  it had to be in exact change, AND, there is no real live person there to help you if you don’t have it!…and I think you have to have exactly two $1 paper bills.  We were not aware of those specifics ahead of time and did not have the exact change in the exact form. Fortunately, some folks coming off the island gave us access via their password (there is a code residents can input to cross). The prison is gone, but I read somewhere that there may be an archeological dig going on at that site. I cannot confirm, but I can sure kick myself in the rear for not making a point to look for the prison site while we were there!

Why does Ohio have a Civil War Confederate Soldier Cemetery?

From information at the site: “In 1861 it became apparent to Federal authorities that the war would not end quickly and plans were made for construction of prisons to permanently house thousands of Confederate prisoners. … The new owner [of the unpopulated island] L.B. Johnson was more than willing to allow the government to clear the land thereby increasing its agricultural and limestone quarrying value when the war ended.”

Today, Johnson’s Island is populated as you will see by the last picture in my post. According to information shared at the site…”On November 15, 1861, the War Department leased one half of Jonson’s Island…and began constructing a 15-acre prison camp on the southeast shore.

“Over the course of the war, about 12,000 prisoners were confined to Johnson’s Island. Compared to other Civil War prison facilities, a remarkably low number–239–died, despite the harsh climate and remote location. The first recorded death was David T.J. Wood on May 6, 1862; William Michael, who died in June 1865, the month the prison closed, was the last.”

If you think you may have a relative buried in the Johnson’s Island Confederate Stockade Cemetery there is a website you can use to look up the name. I will include that website address at the end of this post. Johnson’s Island is connected by a causeway in Sandusky Bay near Marblehead, Ohio. The Confederate Soldier’s Cemetery is free to visit.

Look up a Confederate Soldier buried at Johnson’s Island at this link.

Owner/Editor at Hall of Fame Moms
Tracy writes about homeschooling and just about anything related to family life in Ohio here on the blog. Strong honest views will surface from time to time on topics related to truth, faith and freedom. **Check out my notebooks and Bible Memory Coloring Notebook workbooks for Adults & Teens by clicking my name.