Touring aboard the Flagship Niagara at Put-In-Bay (Tall Ships) 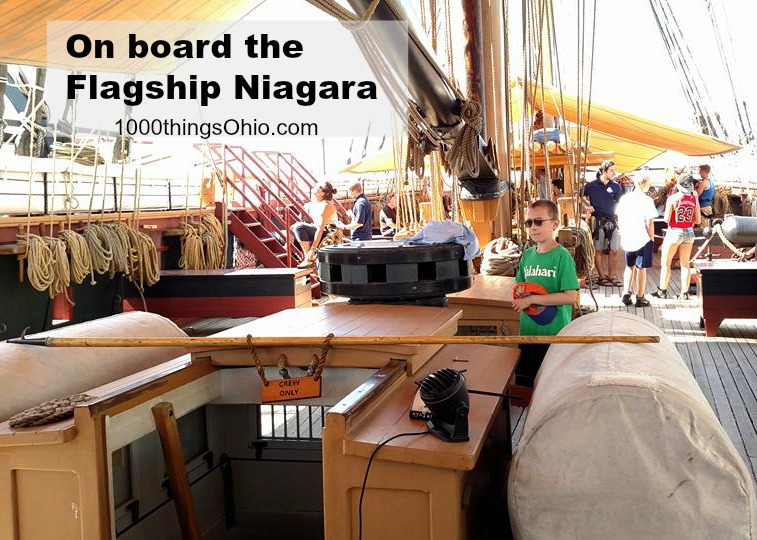 Note: This post originally appeared on my website which is coming down soon. We visited this Tall Ship in 2016.

The U.S. Brig Niagara was reconstructed for the third time in 1988. It is a reconstruction of the original vessel that Commodore Oliver Hazard Perry commandeered during the Battle of Lake Erie in 1813, a battle part of the War of 1812. Perry and his crew were then victorious over the British Fleet. “We have met the enemy and they are ours.”

“On September 10, 1813, nine small ships — six of them, including Niagara, constructed at Erie – defeated a British squadron of six vessels in the Battle of Lake Erie. A pivotal event in the War of 1812, it led to regaining Detroit, lost at the war’s outset, and lifted the nation’s morale.” (Quote is from the website; link will be at the bottom of post).

See Perry’s International Victory and Peace Memorial here. You can view Canada from the top! Also called Flagship Niagara, this ship, I’m told has a bit of the wood from the original ship (located in an area we were unable to observe) and is a certified Sailing School Vessel according to their brochure. We had the opportunity to tour this ship while visiting Put-In-Bay, Ohio just several weeks ago in June.

Read more about the Flagship Niagara at their website here.”Flagship Niagara is not accessible to persons with disabilities due to the historic nature of her construction. A video tour is available.”

See the calendar of events for Tall Ships events here.